*** INVITATION TO SUBMIT PAPERS TO THE SPECIAL ISSUE OF MICROMACHINES (IF 2.523)
ON MICRO/NANOPHOTONIC DEVICES IN EUROPE
Original or review articles - either theoretical or experimental - may be submitted by 15 JANUARY 2022.
Guest Editors: Luigi Sirleto e Giancarlo C. Righini

*** INVITATION TO SUBMIT PAPERS TO THE SPECIAL ISSUE OF MATERIALS (IF 3.057)
ON GLASSY MATERIALS: FROM PREPARATION TO APPLICATION

Original or review articles - either theoretical or experimental - may be submitted by  28 FEBRUARY 2022.
Guest Editor: Giancarlo C. Righini


***  The 9th International Workshop (PRE'21)
on PHOTOLUMINESCENCE IN RARE EARTHS: PHOTONIC MATERIALS AND DEVICES
is planned in September 2021 in Cancun, Mexico.
Changes are possible due to COVID-19 pandemic. Further information will be given by the end of March 2021.

Contract professor of  Optical Technologies at the School of Specialization in Optics and of Optoelectronic Devices and Integrated Optics at the Electronic Engineering Department, Università di Firenze (in the period 1995 to 2010).

President of the Italian Committee for Promotion of Optical Sciences and Technologies (FOTONICA.IT)

Honorary Chair of the International Workshop "Photoluminescence in Rare Earths: Photonic Materials and Devices" (held every other year)

Currently he is member of the Editorial Board of the following journals: Fibers, Optoelectronics Letters, Photonics Letters of Poland, International Journal of Optics, Micromachines.

He was editor of the SIOF book series "Quaderni di Ottica"

He has been referee for many international journals (Electronic Letters, Applied Optics, ...)

Co-editor of the book Introduction to Optoelectronic Sensors (World Scientific, 2009).

Co-editor of the book Glassy Materials Based Microdevices  (MDPI Books, 2019)  - open acces, the full book can be downloaded -

Characterization of Rare Earth doped glasses for photonic applications.
This research is performed in collaboration with Trento and Milano Sections of IFN CNR (Istituto di Fotonica e Nanotecnologie), the Scientific and Technological Department of Verona University, the UAM University at Itzapalapa (CDMX), and CINVESTAV (CDMX).

Spherical microresonators based on the propagation of Whispering Gallery Modes for microlasers and microsensors.
Collaborations exist with the Trento Section of IFN CNR and ENSSAT in Lannion, France.

Giancarlo C. Righini studied at the University of Firenze and received the "laurea" (dr. degree) in Physics in 1967. In 1968 he was awarded the title of chartered teacher of mathematics and physics.

After having been research fellow at the Institute of Physics of the University of Firenze from 1968 to 1971 and having served in Technical Corps of the Army, since 1972 he is in the staff of the Research Institute on Electromagnetic Waves (IROE), now "Nello Carrara" Institute of Applied Physics (IFAC), of the National Research Council of Italy (CNR).
In 1988 he was appointed to the position of Senior Researcher, and since 1991 he is one of CNR Research Directors.
He was member of IROE Scientific Committee in the years 1973 to 1981; from 1983 to 1996 he was Director of the National Group on Quantum Electronics and Plasma Physics (GNEQP-CNR).
From 2006 to 2009 he has been Director of the CNR Department of Materials and Devices.
From 2012 to 2016 was Director of the Research at Enrico Fermi Centre.
In 2010 he retired from CNR and he now maintains a position of associate scientist at IFAC CNR (Firenze)

At IFAC he headed the research group at MDF Lab (Photonic Materials and Devices). His recent research interests concern microresonators, grating structures, integrated optics, glasses for optoelectronics, nonlinear optics. Experimental activities carried out in the laboratory included fabrication of waveguides and components in glass by ion exchange, thin-film deposition and etching, and optical characterization of thin films by guided-wave techniques.
He has published over 600 papers (many of them also on holography and optical signal processing), and is co-author of 7 international Patents. He has presented many invited papers at international Conferences. He has authored (or co-authored) various chapters in books on optoelectronics and guided-wave optics (both in Italian and in English).

He has been chairman or co-chairman of many National and International Conferences, and has edited several Proceedings Volumes.

Prof. Righini has regularly taught monographical courses at different Universities in Italy. From 1994 to 2004 he was contract Professor of Optical Technologies at the Specialization School in Optics of the University of Firenze, and regularly lectures at the Engineering Faculty, Università di Firenze.  For many years he also was in the Academic Staff of the Advanced Course in Optical Technologies at AILUN in Sardinia. From 2005 to 2012 he was contract professor of Optoelectronics at the Sciences Faculty, Università di Florence.
He has been supervisor of many thesis works of graduate and PhD students in Physics and Electronic Engineering, at the Università di Firenze, as well as member of the Jury in several PhD defenses in France and Spain.

He was responsible of several bilateral cooperation Projects (with Czech Republic, France, Great Britain, Hungary, Portugal, Spain, and United States) in the area of guided-wave optics. He was also involved in two ESPRIT Projects and one ACTS Project of the European Commission, as well as in many National Projects funded by CNR or by the Ministry of Education, University and Research (MIUR). 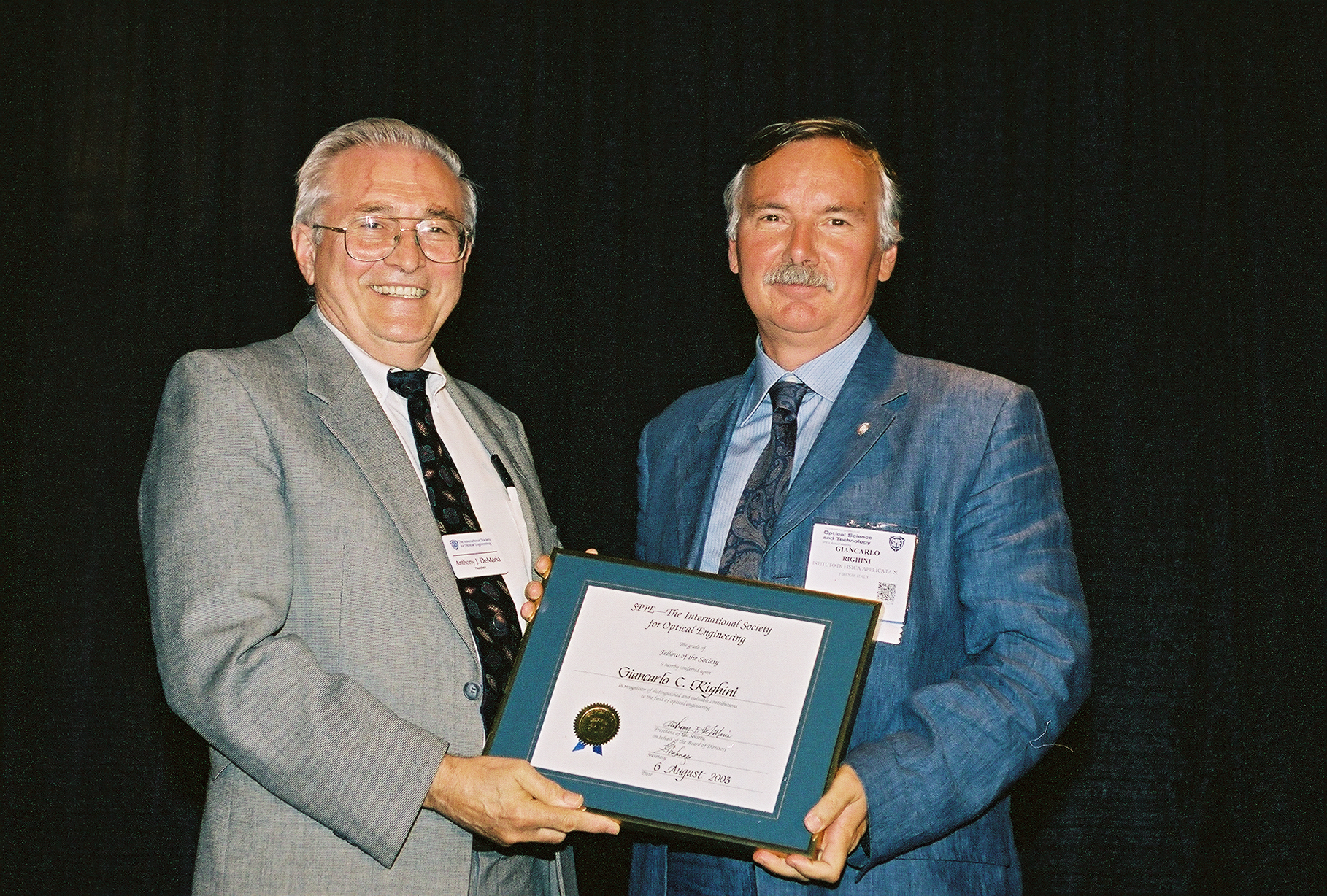 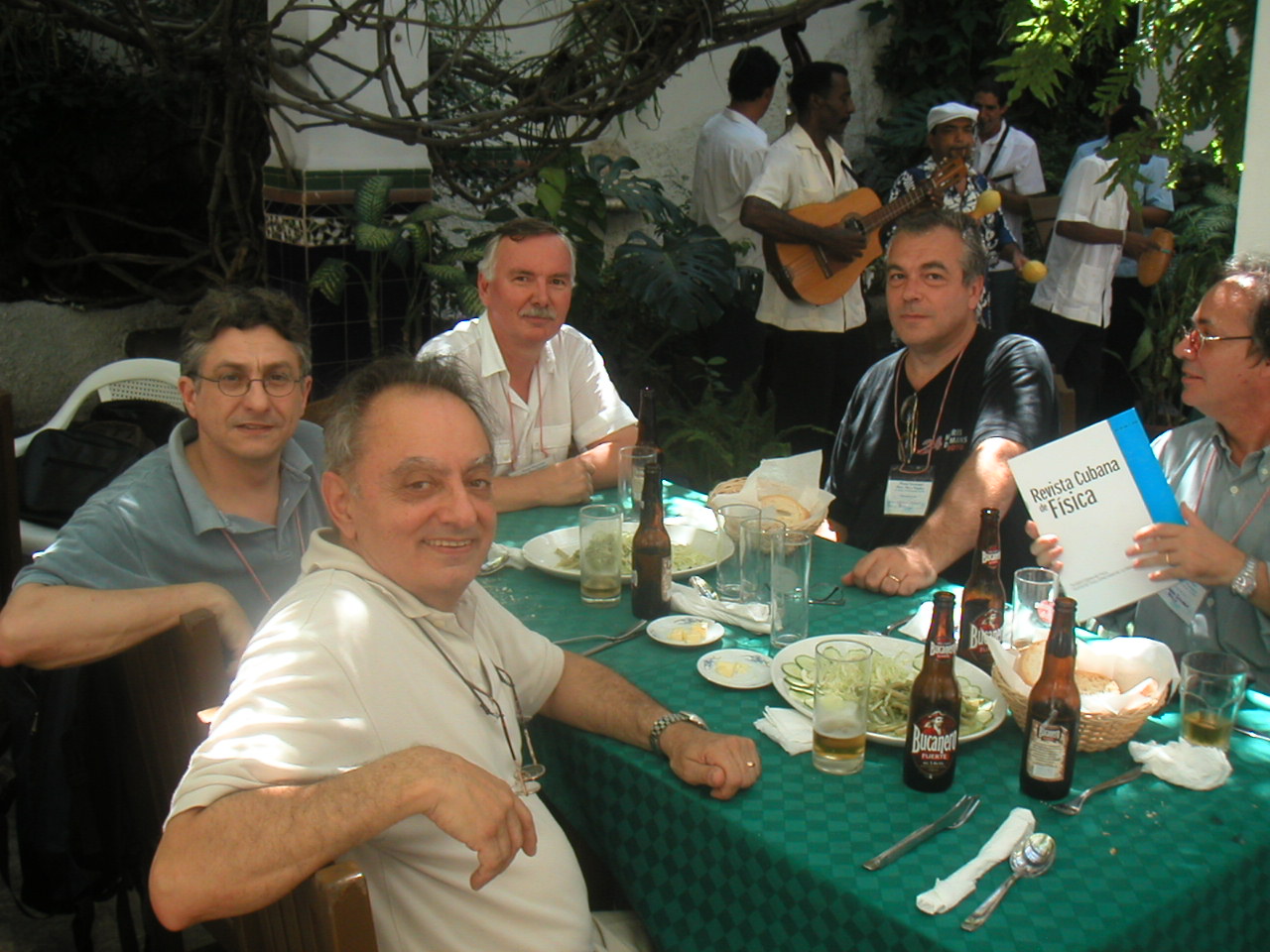 Together with some Italian and Argentinian colleagues at the
Optics, Life & Heritage ICO Conference (Cuba, 2004) 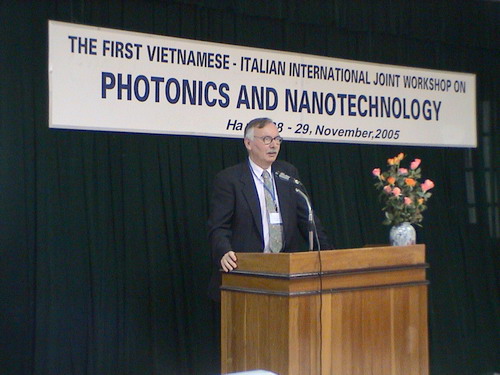 At the Italian-Vietnamese Workshop in Hanoi (November 2005) 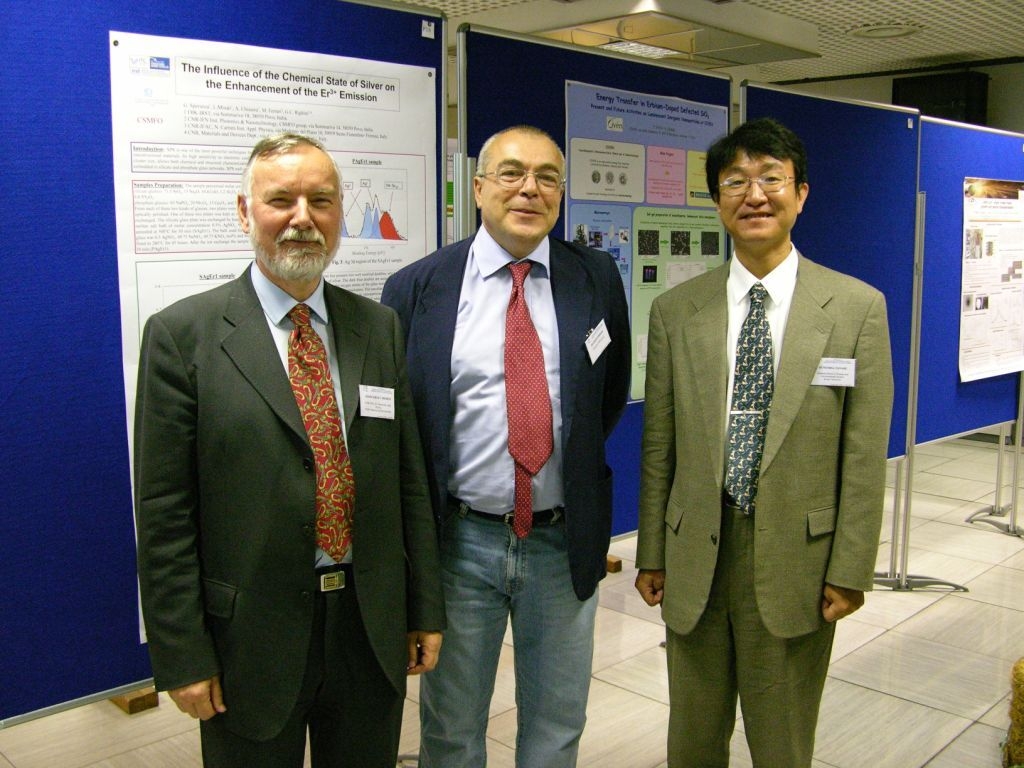 Together with Maurizio Ferrari and Setsuhisa Tanabe, co-chairs
of the PRE'07 Workshop in Trento (April 2007)

Photonics West 2013: a journey by in cable car
is a must.

In the surroundings of Kyoto, before the ICG Congress in Yokohama, Japan (2018)